Meaning: to be fleeing the police or to be in a hurry
Example: The robbers were on the run from the police. The woman got a phone call from her friend. She told her she would call her back because she was on the run and was late for work.
See this Idiom in a story: Jack and the Bean stalk, Snow White and the Seven Dwarfs 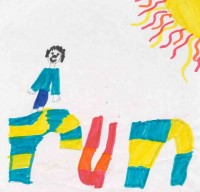