Meaning: to do very poorly at an event or activity or in the case of war to make people move by dropping bombs on them
Example: The general tried to bomb out the town, but after the bombs were dropped, no one had fled the town. The general had bombed out on bombing out the town!
See this Idiom in a story: Sports: Adam Plays Football 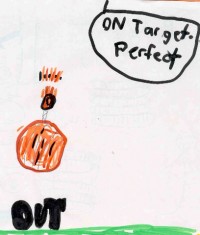