Meaning: darn it or phooey, used as an exclamation when something goes wrong meaning or someone who tells on someone is called a ratfink. (see to grass on)
Example: When the boy broke his mom's favourite dish he said, rats. When his sister told on him he called her a rat!
See this Idiom in a story: Puss and Boots 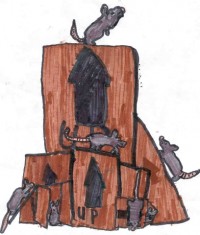